It is no great surprise that after a decade in production Volvo's XC90 was quickly becoming outclassed by its rivals. This meant one thing, Volvo needed a new one and by that I don't just mean some new headlights grafted onto the front of a 10 year old design. No, I mean from the ground up, a brand new XC90 was needed. Well as luck would have it Volvo built one and I've been driving it for a whole week, so with new architecture underpinning it and a new range of engines has the XC90's rebirth been a success? 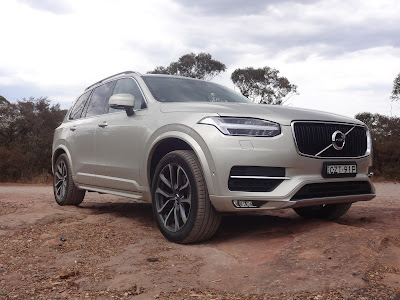 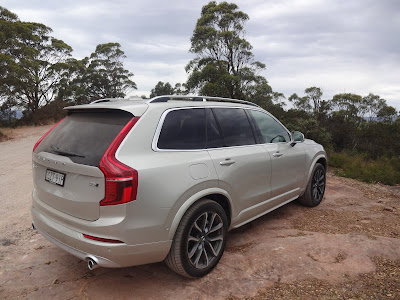 Whats the Volvo XC90 all about?

The XC90 has always been Volvo's answer to the Audi Q7, BMW X5 and Land Rover Discovery, meaning it's a big (almost 2 tonne) SUV capable of hauling up to 7 people around in absolute comfort. The "all new" one though, seriously it doesn't share a single thing with the old car apart from a name badge, aims to outdo the opposition. Featuring an interior straight from a book on how to be boutique, phenomenal performance/economy from a, you guessed it, brand new 2 litre turbo diesel and Volvo's now familiar safety technology. Oh and remember those things called buttons? Well inside the new XC90 don't expect to see many, they've gone the way of the flip phone. In their place sits a centrally mounted 12.3 inch ipad style touch screen controlling everything from the heated seats to the cars interior mood lighting. 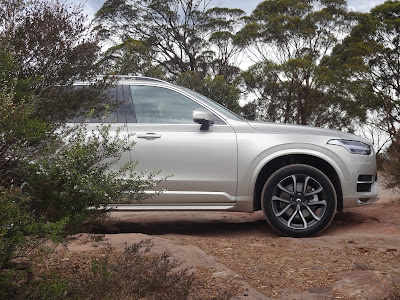 Visually the XC90 clearly draws on its predecessor but crucially has been brought bang up to date, features like the high waistline crease, vertical tail lights, pumped wheel arches and big grill remain but the lines are just that bit crisper. I wouldn't go as far to say it's a pretty car but what SUV is? Instead I'd call it imposing and surely that's what an SUV should be anyway. Those LED headlights with active high beam are a triumph too, slim, simple yet hugely powerful they give the car a distinct face, night or day. 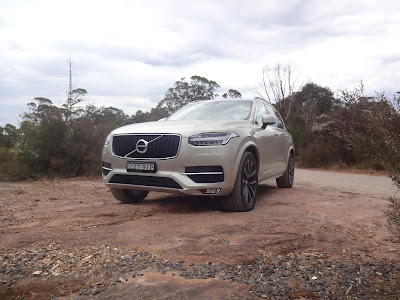 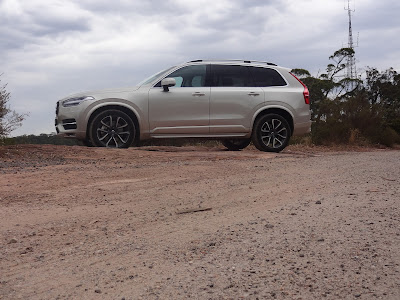 Open the weighty door and we come to what I think is the XC90's best feature; the interior, albeit brown over wood over cream isn't everyone's cup of tea the ambiance screams boutique lounge bar. Seven leather covered seats come as standard in this serene interior, with the fronts electrically adjustable in every direction, both also have a memory function too. Second row passengers benefit from their own mini touch screen to control the A/C while right at the back you will find 2 full size seats and enough leg room to mean, finally, the back doesn't need to be reserved for children only. It's also worth noting that there is plenty of storage compartments in the back. However as I eluded too cream leather might not be the best choice for a family wagon, the test car was showing signs of engrained dirt after just 5500kms while the cream carpets weren't fairing well either. My personal opinion is that cream probably isn't the best colour combo for a car of lolly eating, brightly coloured juice drinking kids. I'd opt for a darker combo and feel easier not needing to carry a can of Vanish around with me all the time. 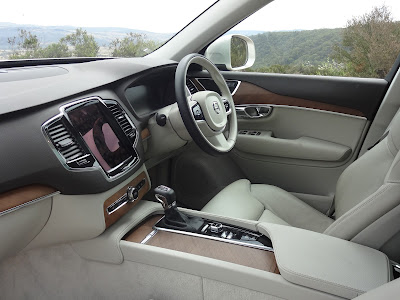 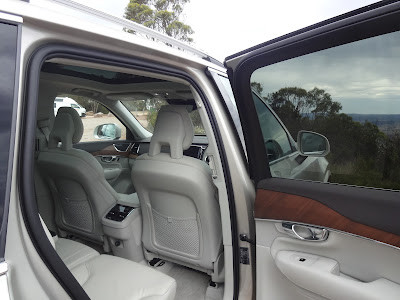 Anyway colour choice aside back to the front where that central touch screen dominates. It takes a little getting used to but soon I found the "pad" easy to navigate, it also responded well to touch, always doing what I asked. Gone are the days of analogue dials too it seems, replaced instead by a crisp screen showing speed, revs and either sat nav instructions or vehicle info in the centre. It's fully customisable too, so providing your willing to delve into the menus via the "pad" you can alter the dials themes and the amount of info displayed. For $300 the car I tested had the High Level Illumination pack fitted, although not a necessity by any means, the pack did help transform the cabin at night. Bathing the interior with low level lighting, it helped set off what was already a very high quality finish. And did I mention the car had real Walnut trim? Again this was a $700 option but wow did it make this car feel classy. All things considered the new XC90 is a very pleasant place to sit. 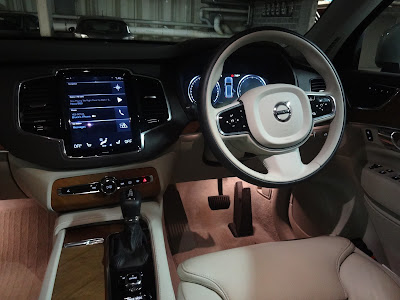 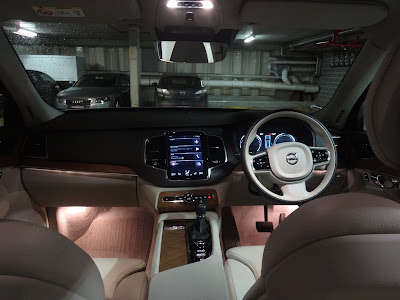 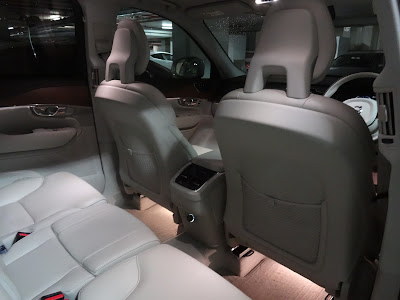 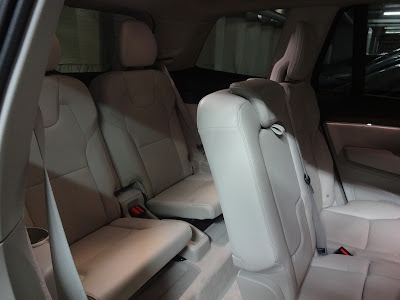 Over the 6 days of driving the XC90 I managed to test it in the city, on the highway, in the countryside and even briefly off road. So its only right I break down this section in a simialr way to how the car breaks down it's driving modes by way of a little roller selector behind the gear stick. It gives you the choice between Eco, Comfort, Dynamic, Off Road and Individual. The latter allowing the driver to pick the best bits from each mode to make the driving experience truly personal (this is a $160 option though). I had it in Comfort most of the time, finding Eco just a bit too power sapping when you needed to get a move on. 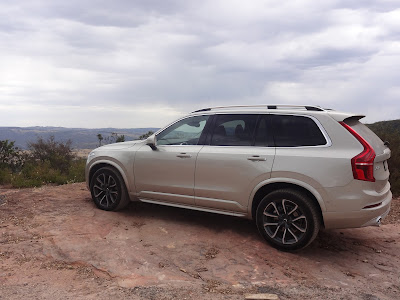 The city, Sydney to be precise

Let me start with this cars least favourite environment but realistically the one where it will spend most of its time, the city. Active safety systems are a great thing, they help prevent accidents and crucially help to rule out that annoying thing we call human error. Being a Volvo the XC90 comes with systems like vehicle, pedestrian and cyclist mitigation and brake support, driver alert control and lane departure warning. However driving in congested Sydney streets these systems can get in the way. More than once the brake support activated despite me being in complete control of the car. I was braking I could see the car in front slowing yet the XC90 felt the need to slam the anchors on for me. Annoying, especially as it kills the engine and you have to slide it back into "P" to restart the engine! At just over 2000mm wide it's sheer size is a hindrance too, going down tight one way streets with cars parked either side had the parking sensors in hysterics. Another issue in the city was the gearbox,  it was a little sluggish when pulling away from lights or in stop start traffic, having not driven the other engine options I'm unsure if this is just an issue with the 2 litre but it certainly won't be winning any traffic light grand prix that's for sure. A few things save the XC in the city though. Those being the steering, which is light and when they are not shouting at you down a narrow street, the parking sensors and the rear view camera are vital. In something so big they all prove invaluable when manoeuvring. It's also worth saying that the self park function works well too, although the car did mount a kerb when I tried it out.

On the highway though is where the XC90 shines; the engine shaking off any sluggish hesitation. With 165kw and 470Nm of torque available from 1750rpm the XC90 devourers kilometres. The twin turbos spinning away also mean the XC90 actually gets close to the manufactures quoted economy figures of 6.2l/100km (combined). I managed a combined 6.9l/100km on 2 hour country and highway run, a pretty amazing figure and one which meant that even after 6 days of use I still had over a quarter tank of diesel left. A word of caution for the lead footed out there though, the slightest twitch of the throttle can see you easily brake speed limits, the way this thing piles on pace is quite phenomenal. Volvo quote a 0-100km/h time of 7.8 seconds, honestly, I believe them, the in gear overtaking ability of this power train needs to be sampled to be believed. 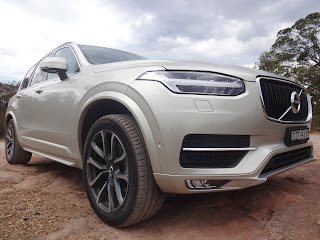 Up on them mountain roads

Above all else it was out of the city on winding bitumen where I was most dubious about whether a 4 cylinder 2 litre diesel would be enough to haul 2 tonnes of SUV around. I needn't have been doubtful, honestly the new twin turbo 2 litre does a remarkable job of making the XC seem smaller and nimbler than its size would have you believe. Selecting Dynamic mode only goes to intensify the experience more; allowing the 8 speed gearbox to hold onto its ratios a bit longer. Barrel into a bend and you find body roll is well controlled and grip ample from the 20 inch 235/55 section rubber however the steering, tuned more I'd say for city manoeuvring lacks feedback and obviously sitting high up you never feel the road surface through your buttocks, it's certainly no sports car but I think it does do a rather good impression of a car based wagon on the twisty stuff. 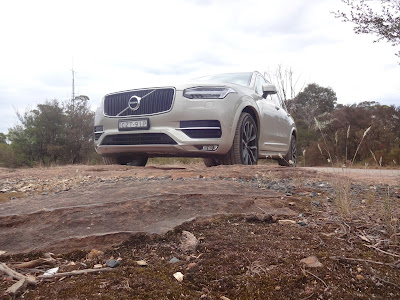 I also took the XC90 off road, if only very briefly onto a rutted dirt track. Selecting the Off Road driving mode slowed the car down, max speed is 40km/h, the gearbox doing its best impression of low range. The ride remained comforting and ground clearance ample, on your everyday unsealed Aussie road the Volvo would have no issue whatsoever. 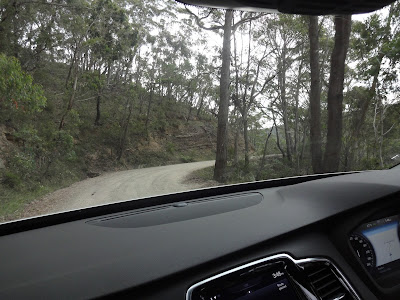 The not so great bits

Besides the niggles mentioned already there are a couple more that you should be aware of. My first issue lies with the stuff that comes as standard on this car, or should I say lack there off. I found the amount of things you had to pay extra for to be a bit cheeky, especially on car costing $90k. Metallic paint for example should really be standard, not a $1700 option. Some of the safety tech that Volvo pride themselves on should also come as standard by my reckoning, things like active cruise control and blind spot monitoring would have been very useful but unfortunately my car didn't have them, instead it had $2950 worth of panoramic sun roof. This amongst other things like those rather nice 20 inch wheels and tinted rear passenger glass meant the total price for the car tested came to $98,860 excluding on road costs. The second issue I had was one my passengers picked up on, that being how difficult it is to slot the middle seats back into place. They found that if the seats are slid forward whilst folded, it takes a lot of fiddling to finally get the seat secured back into an upright position again. 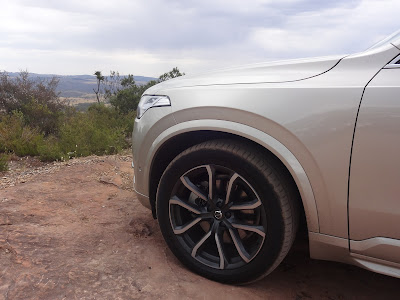 Negatives aside though, the all new Volvo XC90 is a very well accomplished car. It is luxurious, effortlessly stylish, safe, powerful and economical, if you have the best part of $90,000 to spend on a an SUV you would be very pleased if you opted for the big Swede. It's big, bold, intelligent and with connectivity literally at your fingertips it looks to where all cars are likely to be going in the future. Good work Volvo, the XC90's rebirth has been a success. 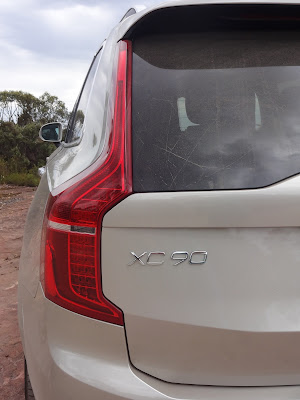 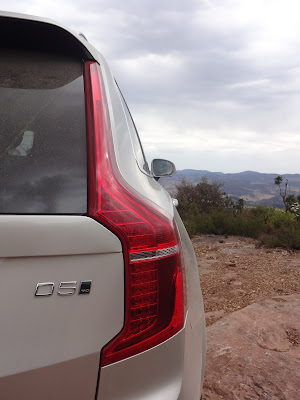 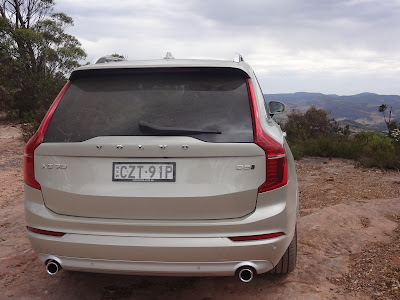 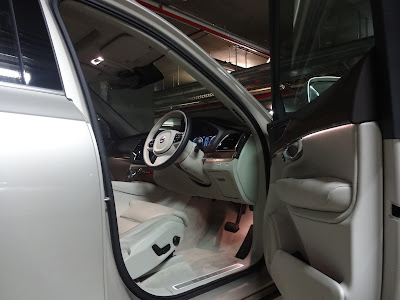 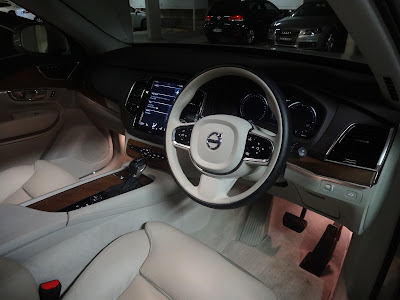