Police getting BMW's, why not go premium yourself?

It is now common knowledge that NSW Highway Patrol are replacing their current crop of Commodore SS and Falcon XR8's with frugal yet fiendishly quick BMW 530d's (and less frugal but still quick Chysler 300C SRT8's). Motorist state and country wide will be trying to etch the outline of BMW's big sedan into their subconscious, just in case they find themselves going 83kph in an 80 zone. And of course being of the mindset that euro luxo barges are always better I thought if the Police can do it so can you! Here are 4 big Euro sedans that you wont need to rob a bank for.

Speaking of robbing banks you know what would do nicely? Audi's C6 generation A6. Available with everything under the bonnet from a 2 litre turbo four all the way to a 4.2 V8 nicked from the R8 supercar the A6 has always been the understated persons luxury sedan of choice. Almost plain on the outside with just a whiff of class from that mid 00's smooth surface design language, the perfect shut lines and 4 silver rings doing just enough to let people know a lot of engineering went into the C6 A6. If fueling the thing up doesn't bother you then personally I'd find a big boy 4.2 litre Quattro for ultimate cross country cruising. 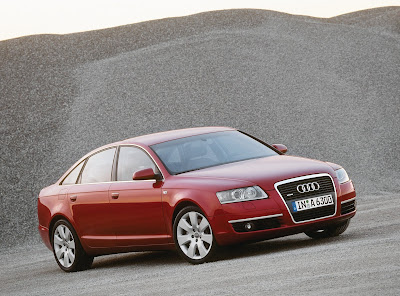 And as luck would have it here is one I found earlier. Yes it might cost a bit to maintain and the KM's are admittedly high for such a high performance power plant but surely the addition of a sports exhaust to that V8 will melt away any warning light woes!
2005 Audi A6 4.2 Quattro: $8000

On the subject of reliability what about a brand that can simultaneously strike fear and love into the hearts of owners? Alfa Romeo and specifically the 166. In my opinion one of the most uniquely handsome sedans ever made. With its comparatively small headlights pushed to other edges of the front end the car is quite hammer head shark like in its appearance. This might be a bit polarising but certainly goes some way to making it an instantly recognisable car. 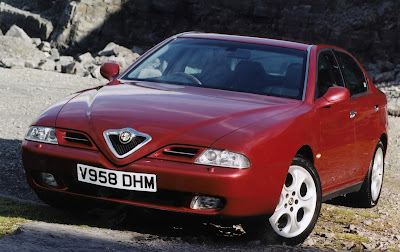 Unfortunately Alfa facelifted the car in 2003 giving it normal sized lights and re profiled the front end. Personally I don't think the latter car is as pretty. Anyway design aside there was really only one engine the 166 deserved, Alfa's 3 litre "Busso" V6 sitting pretty with polished intake manifolds its enough to make you go weak at the knees and don't get me started on the sound! Luckily for us petrol heads Alfa's horrible reputation for reliability means even the relatively rare 166 is super affordable. $6k is all you need to bag a good one. Have a look below.
1999 Alfa Romeo 166: $6000

Remember when James Bond drove BMW's? I can because they where the Bonds of my childhood and the one that stands out is 1997's Tomorrow Never Dies 7 Series. It wasn't a sexy bond car, it was't a glamorous Bond car but for some reason I lusted after it. 007's was of course a big 750i V8 but the BMW's range topper also came with smaller bent 8's and some of BM's sweet inline sixes too. 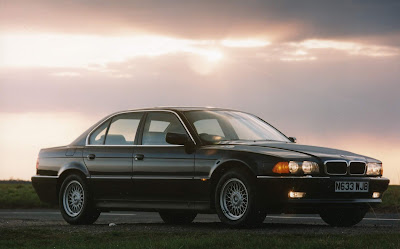 Subtle and understated on the outside BMW threw everything but the kitchen sink at the interior. Sumptuous electrically adjustable seats, and a memory function that would adjust everything to a particular drivers preference when they opened the door. there was also tray tables in the back, a car phone, TV's and sat nav all featured in the 7 in the 1990's! No wonder it cost upward of $170k when it was new. Nowadays however a mere 6 grand will get you into one and in the case of the car I found below it could be a real peach, listen to my podcast for more details.
2000 BMW 735i; $5999

No run down of luxury Euro sedans would be complete without taking a look at the Mercedes Benz line up. And to be honest with Australia having always been such a strong market place for Benz I was bit overwhelmed by the choice on the used market. Following the theme of the above cars I could have lumped for an big S-Class, there are too many to choose from for under $8k, but I thought it might be funner to push the hypothetical budget and get something a little rarer from the slightly smaller E-Class stable. 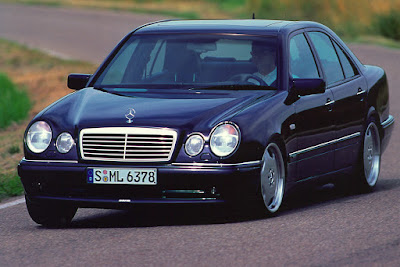 I give you the sub $15k E55 AMG, sitting purposefully on classic Merc mono block alloys the E55 is an autobahn stormer if ever there was one. Unlike the AMG's of today which shout about their intentions and actually go around corners without falling over the old W210 E55 was designed to obliterate long distance drives and overtake everything in its path thanks to a 5.5 litre V8. Corners came second and the lazy auto box didn't exactly reward the spirited driver. In saying that that though the W210 chassis still underpins the Chrysler 300C some 22 years after it was released! Yes the very 300C that the Police now use in SRT8 form along with those BMW's, so much like I said at the start if its good enough for the law...
1999 Mercedes Benz E55 AMG; $13590

I have also rambled on and given some more details about these cars, specifically the ones for sale on my podcast. Please go and have a listen if you can spare the time.
The Podcast