Ok I am back from my holidays so it is about time I get to updating my little blog and what better way than with an actual road test. I give you the BMW 525i. 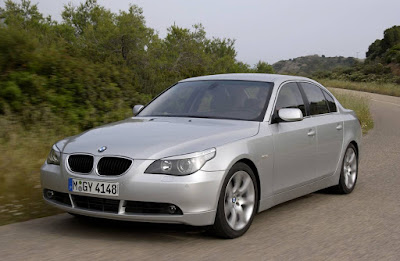 Let me begin with a confession; the E39 BMW M5 is a car on my vehicular bucket list, meaning naturally this weeks car, the flame surfaced E60 didn't draw me in as much as it's classically proportioned predecessor. However that was a worryingly long time ago, 2004 to be exact and since then the years have been favourable to Chris Bangles shake up of the 5 Series. The car manages to pass as a modern sedan and dare I say look more interesting than the current 5 series that replaced it in 2010. The passing of 11 years also means that the 5 now represents an affordable way into BMW ownership and I've been driving a 525i variant to see if this one time ugly duckling is worth your dollar. 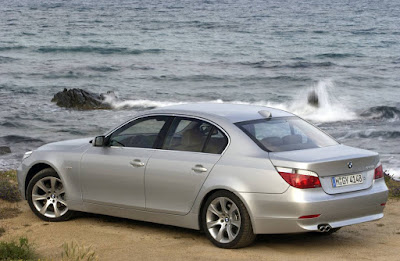 Driving is probably the best thing to start with given BMW's persistence that they make the ultimate driving machine. And I think one word can sum it up; smooth. With the gear selector flicked into D the straight 6 goes about the duties of moving the E60 effortlessly, there are no vibrations, no rattles and no intrusive noises, just a surge of power under your right foot to get you where you need to be. The car feels tightly screwed together as well, with nicely weighted controls and steering which the more committed you become gives greater and greater feedback. Being rear wheel drive means there's a nice balance to the car too, the front wheels unhindered by weighty drive shafts point exactly where you need them, the rears providing the shove to tuck the nose into corners and propel you out the other side onto the next one. 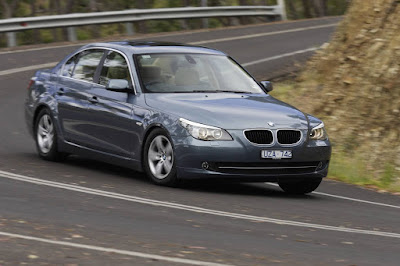 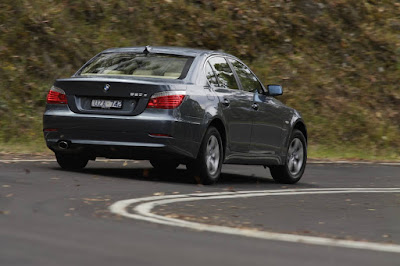 It's no drift car

However don't expect any hooliganism from the 5, it's no drift machine, there is a lot of grip on offer and quite frankly you'd have to be doing something entirely stupid to lose control of one. I drove it partially in the pouring rain and never once saw the traction control light flicker or feel anything other than total stability. I didn't find the 160kw 525i particularly quick though, yes the rain might have meant I was being very gentle on the throttle, but when the car did kick down I never felt like it could send the scenery outside spiralling backwards. If it is speed your after I'd suggest a torquey 530d or beefier 540i V8. Never the less the smooth quiet progress offered from the 525 still makes it an appealing car. 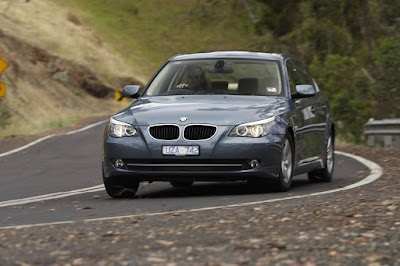 Inside the 2009 car I drove everything had worn very well and like the exterior had aged well too. The dash layout is clutter free, just the A/C and radio controls reside in the centre console and the dials behind the 3 spoke wheel are big and clearly visible. The whole cabin wraps around the driver helping keep up that ultimate driving machine persona too, with lots of leather and in the case of the car I drove swathes of grey wood grain trim on the dash and doors. More traditional wood grain was also available from new. Moving onto seating and there is room for 5 adults to squeeze in, but 4 is far more comfortable. The back proving to be quite spacious with ample head space should one have a particularly vertical hair cut. Up front though is where the 5 really shines, with electrically adjustable supremely comforting seats. These help aid a level of ride quality I wasn't quite expecting, maybe I'm too used to stiffly sprung Audi's, but the 5 series composure over bumps and undulations came as a pleasant surprise. 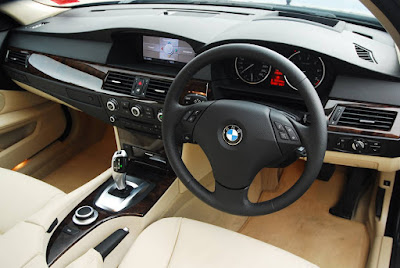 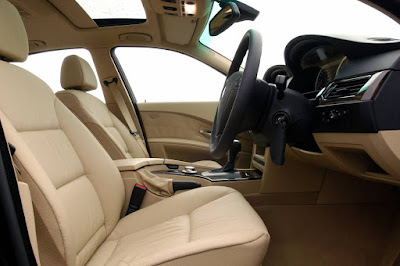 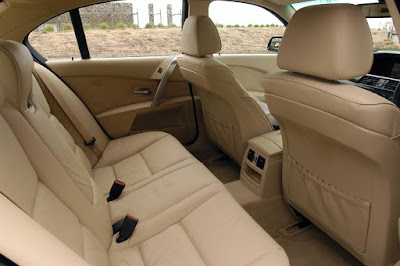 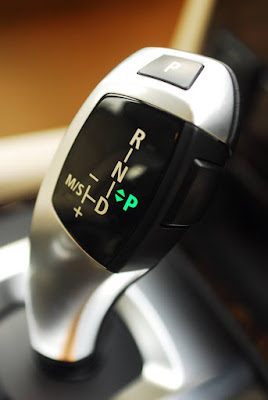 What can go wrong?

The idrive system was my biggest bug bear, it's getting a bit old and given it was never highly thought of, now in the age of tablets that can replace your laptop it feels clunky, unintuitive and slow. E60's have their fair share of mechanical and electrical gremlins too, any Google search for faults will through up a myriad of issues. The car I drove though had only had issue with rear parking sensors not always working and tyre pressure warnings coming on unnecessarily. So not too bad and hopefully given the age of these cars now a lot of the possible faults will have already been fixed by previous owners and all you'll need to do is regular maintenance to keep the car in fine fettle. 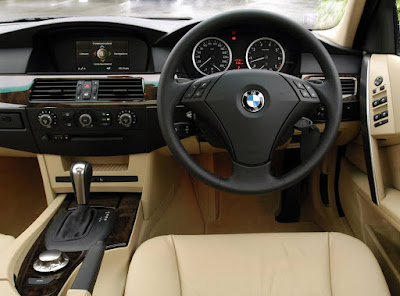 The E60 5 series BMW, a fine and dare I say unconventionally handsome sedan. Time has been kind to a car that divided opinion a decade ago and now thanks to prices starting at as little as $9000 the mid size offering from BMW represents a well built, composed and comfy second hand driving machine. 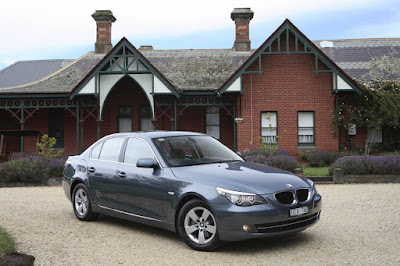 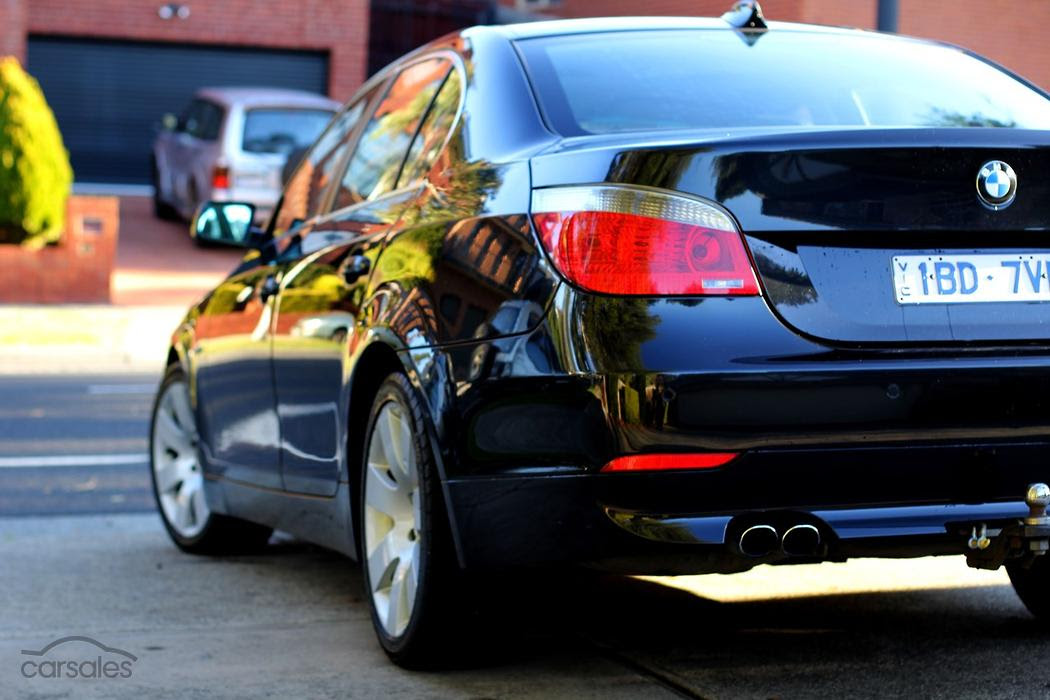 This car caught my eye for a couple of reasons, firstly for a private seller the pictures are rather good, shows they put some effort in and no doubt want to showcase how well cared for their car is. Secondly that $2500 repair bill means $2500 you don't have to spend fixing it and everything should be in tip top condition.