10 years ago, if you were in the market for an all wheel drive, unnecessarily rapid estate car your only real choices were a Subaru an Audi or bizarrely a Jaguar X-Type. Things are a little different now though and manufacturers whom once upon might have turned their noses up at the prospect of building an AWD car (BMW) are clambering over one another for a slice of this niche fast wagon market. And the latest addition makes a pretty strong case for itself. This is the new Mercedes Benz C450 AMG 4Matic.

Lets start with some numbers, 273kw, a 5 second dash to 100km/h, a 2996cc twin turbo charged V6 and an official economy figure of just 7.7l/km. Impressive stats given that we haven't even heard what the no holds barred new C63 AMG is going to deliver. Realistically speaking this C450 should be all the fast wagon you'll ever need. The engine is without doubt impressive with Mercedes planning to release more cars with this power plant over the coming years, cars that will fill the gap in their range between run of the mill 4 cylinder models and seemingly physics defying power house AMG models. Mercedes way of describing this is "More emotionally inspiring AMG sports models will follow". Just keep it simple Benz, you want more poweeer!

The word emotional is actually used a lot in the press release for this car, from describing the way it drives to the way the switches work and even to describe how the car double decluctches on downshifts in Sport Plus mode. Personally I don't want my 273kw super wagon making me teary eyed when I'm downshifting for a tight left hairpin, that just sounds dangerous. No what I'd rather is that my new car made others emotional, with envy perhaps, or just plain scared when they saw it rumbling passed. The latter, I think, Mercedes have pulled off.  The new C450 looks superb especially in black, on those optional 19 inch light weight alloys. Subtle yet effective AMG bumpers, skirts and quad exhausts give the C450 an aggressive menacing appearance without being too in yer face. Merc didn't have to do too much, it's not as if the standard C-Class was an ugly duckling in the first place. The interior of the C450 is another masterstroke. If you compare my review from last year of the new Mercedes Benz C200, the difference's in the 450's interior will run to some sports seats and red stitching. No bad thing as the C's cabin was pretty much perfect as is. 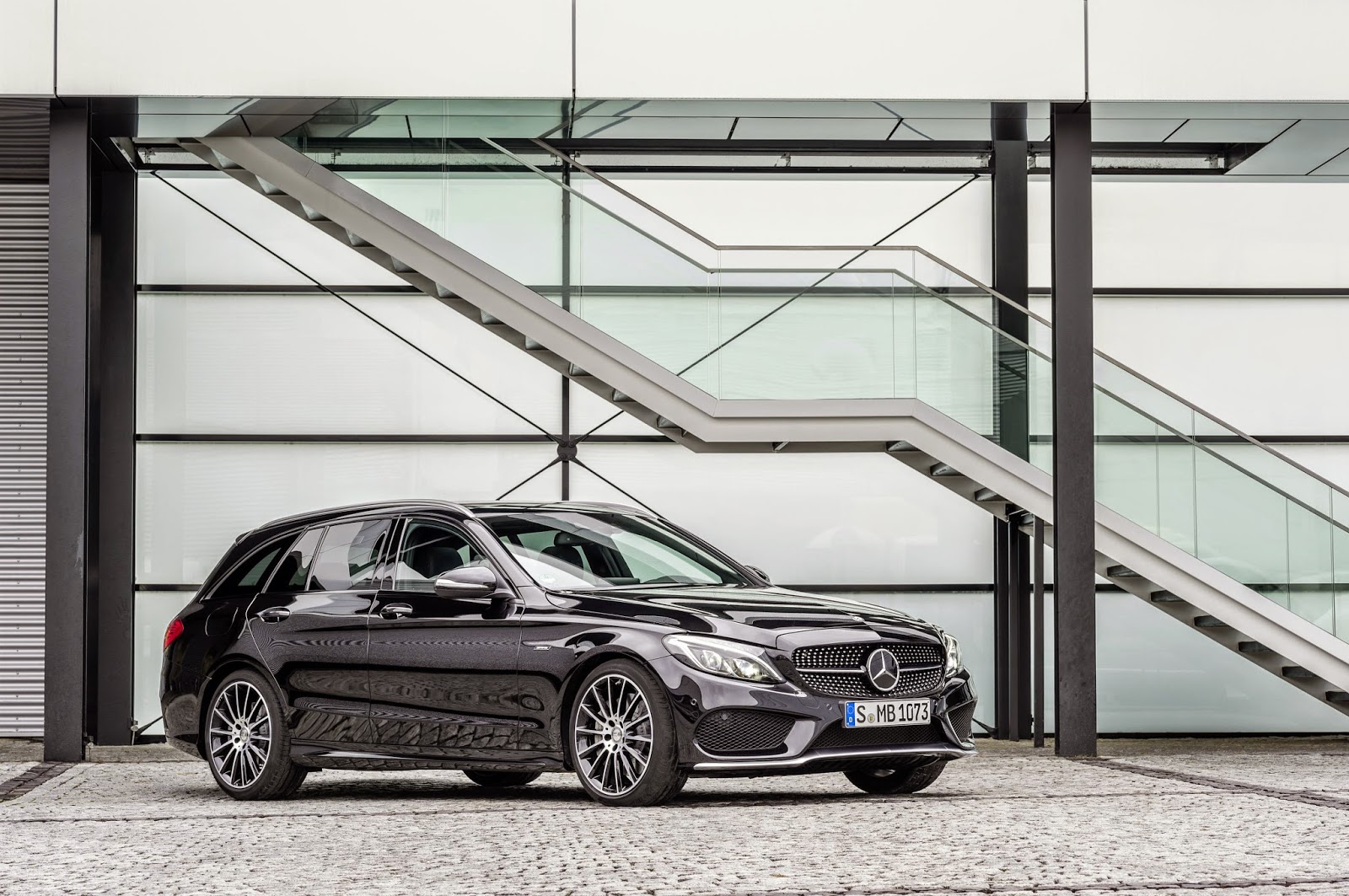 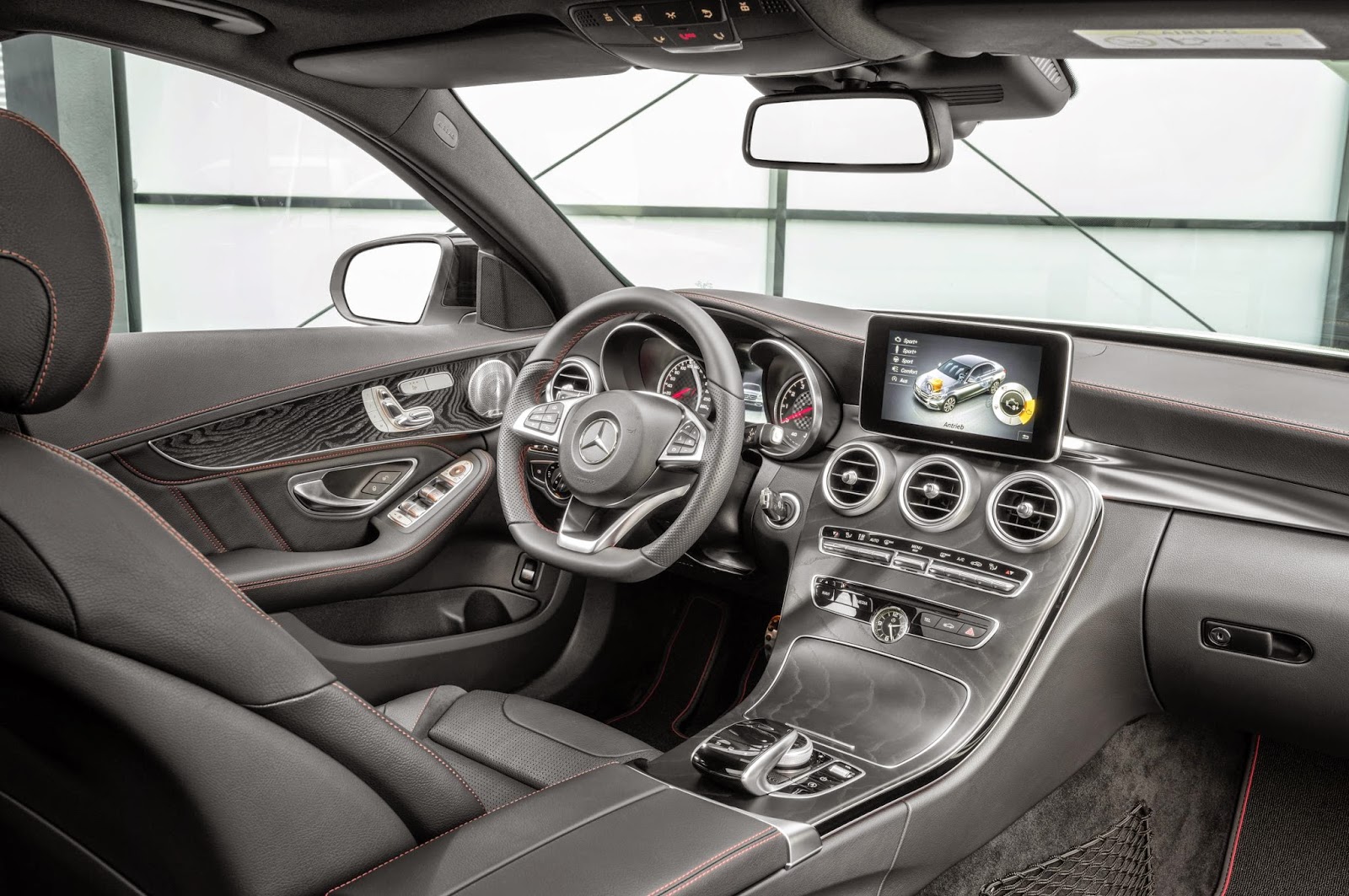 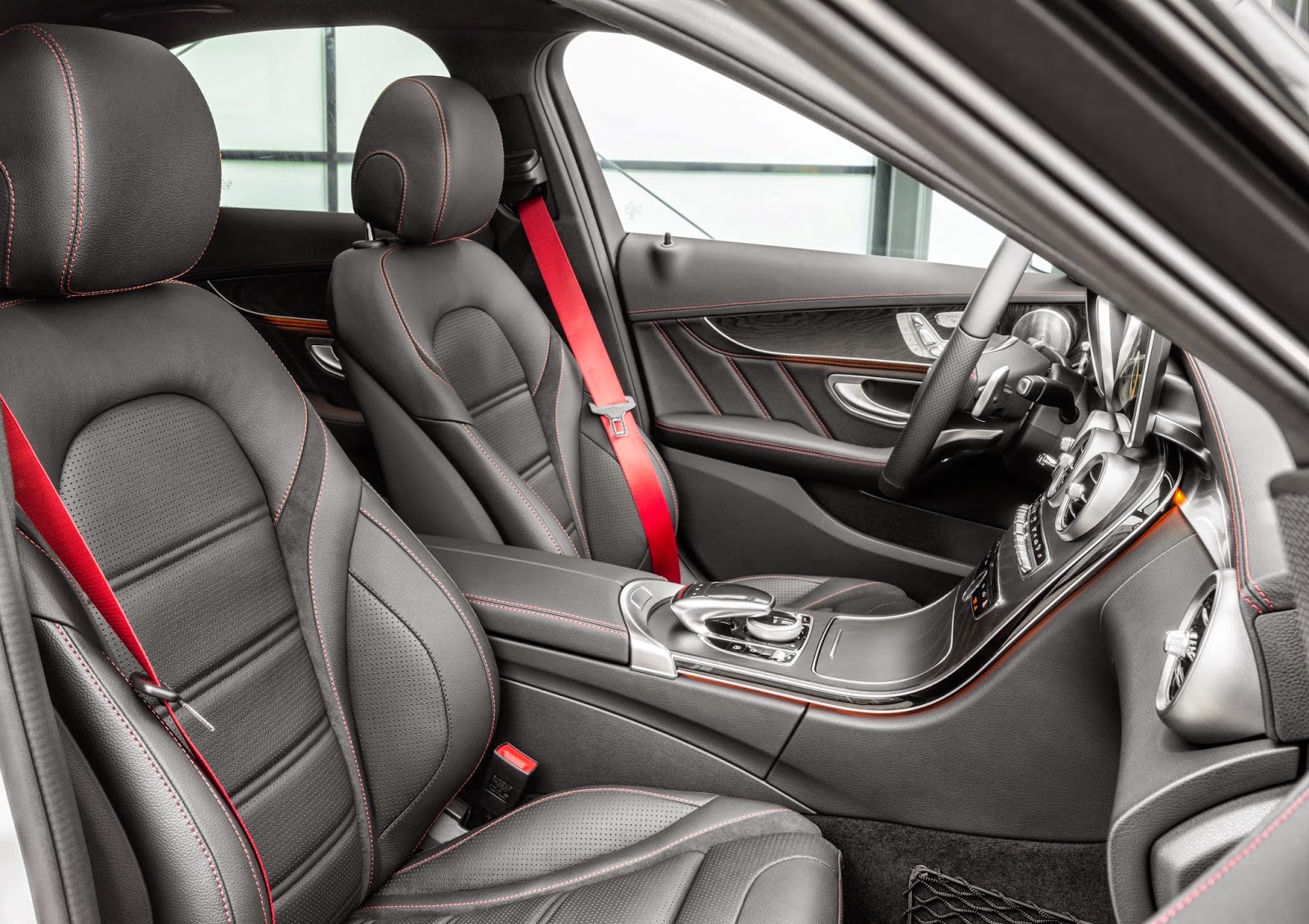 Driving dynamics and the ability this car possesses to hold on when the road gets twisty is something Mercedes are very proud of. Honestly there are far too many systems to list that keep the C450 facing forward at frighteningly high rates of speed. The most notable being that 4Matic all wheel drive system with rear biased torque split and AMG Ride Control adjustable suspension. At the flick of an emotional switch the driver can custom make their perfect driving set up.  Having personally tested Mercs 4Matic system in a CLA45 AMG I can assure you the stuff works! I swear it's some sort of electro mechanical witchcraft, the systems seemingly unflappable and always able to get you out of trouble even if you drive like an utter twit. Rest assured the C450 AMG will be a serious weapon when road conditions allow, come to think of it with 4Matic it'll be a serious weapon in the middle of a monsoon too. 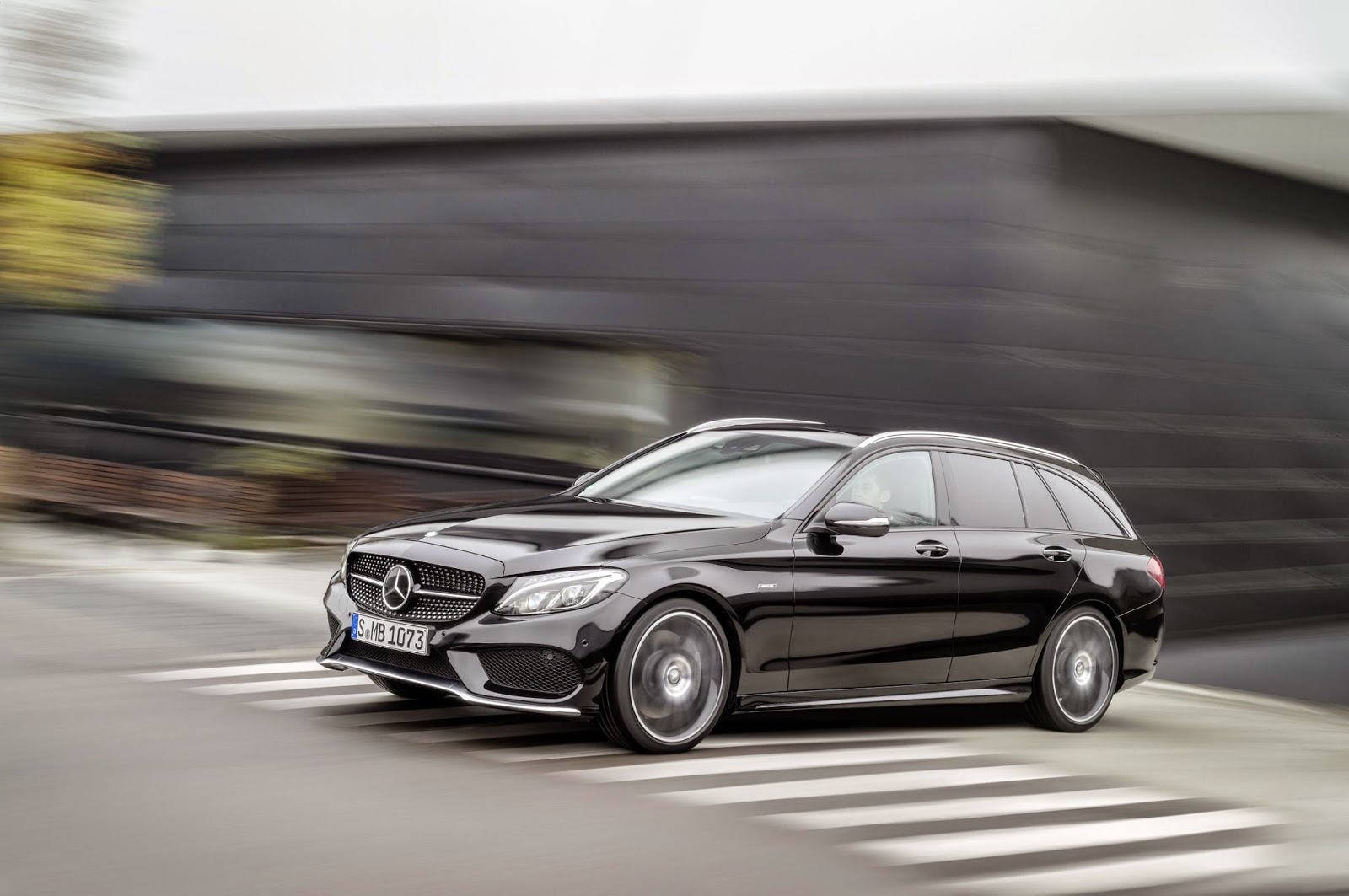 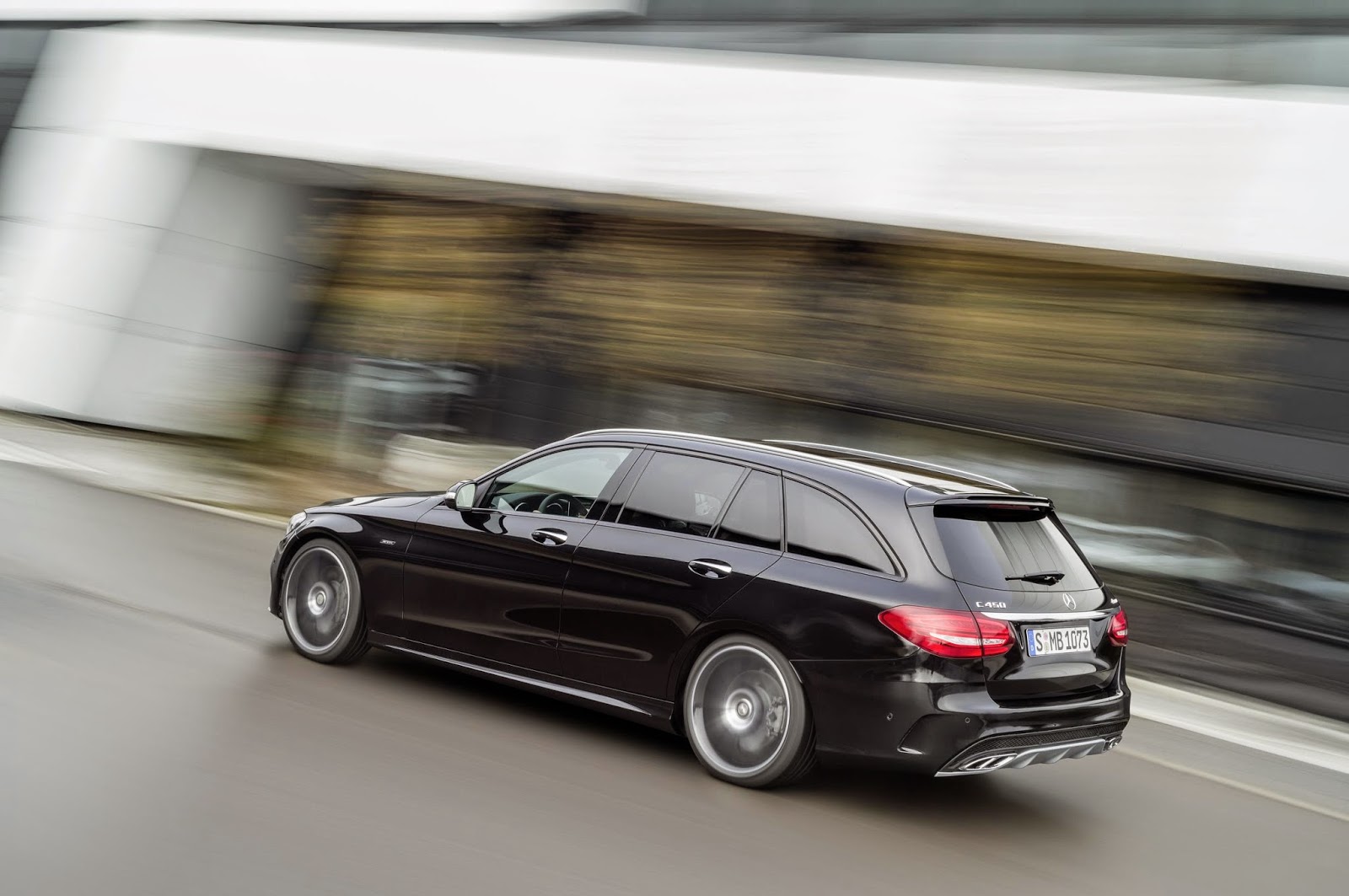 You'll have to wait

The only downside, bar the inevitably hefty price, is the wait until you can get one. It will be released in the spring of 2016 in the UK with Australia probably having to wait a little longer. There is a worry of course that it won't make it to Aus dealers at all, but the chances of that are pretty low given the Aussie appetite for fast German metal, just look at Audi's RS brand sales figures.
Source: newspress.co.uk
Posted by Bruce at 14:05